A NOCTURNE v1.1 progress update - the road to a standalone release!

It's been a long old haul from the release of v1.0 (I just realised the last devlog I wrote for the game was all the way back in the halcyon pre-pandemic days of 2019), but I'm finally able to announce that v1.1, aka the full standalone version of A NOCTURNE is.... close to being ready! How close? Well, let's get into that.

First, a quick detailing of what I mean by "standalone": right now, A NOCTURNE v1.0 relies on the group playing it to have access to Blades in the Dark, or at least its SRD, in order to make full use of it. It leaves out a *lot* of groundwork and basics needed to run a Forged in the Dark game in favour of merely presenting updates, adjustments, and anything else that's unique to A NOCTURNE's version of the engine. As such, it's nice, but it's not what I'd call a complete game. Thus, v1.1, the next release, is going to be standalone - it'll include everything you need to play the game in one self-contained package under the established Forged in the Dark license. That's the main thing, at least - going standalone is also my excuse to reevaluate the rules, polish things up, add in more art, and generally make the rulebook feel way more rulebook-y.

As you can imagine, this has been a lot of work, and I've still got a few things I need to get done before I can release it. So, with that in mind, let's go over what I've got done so far. This is a raw screenshot of my to-do list as of the writing of this devlog: 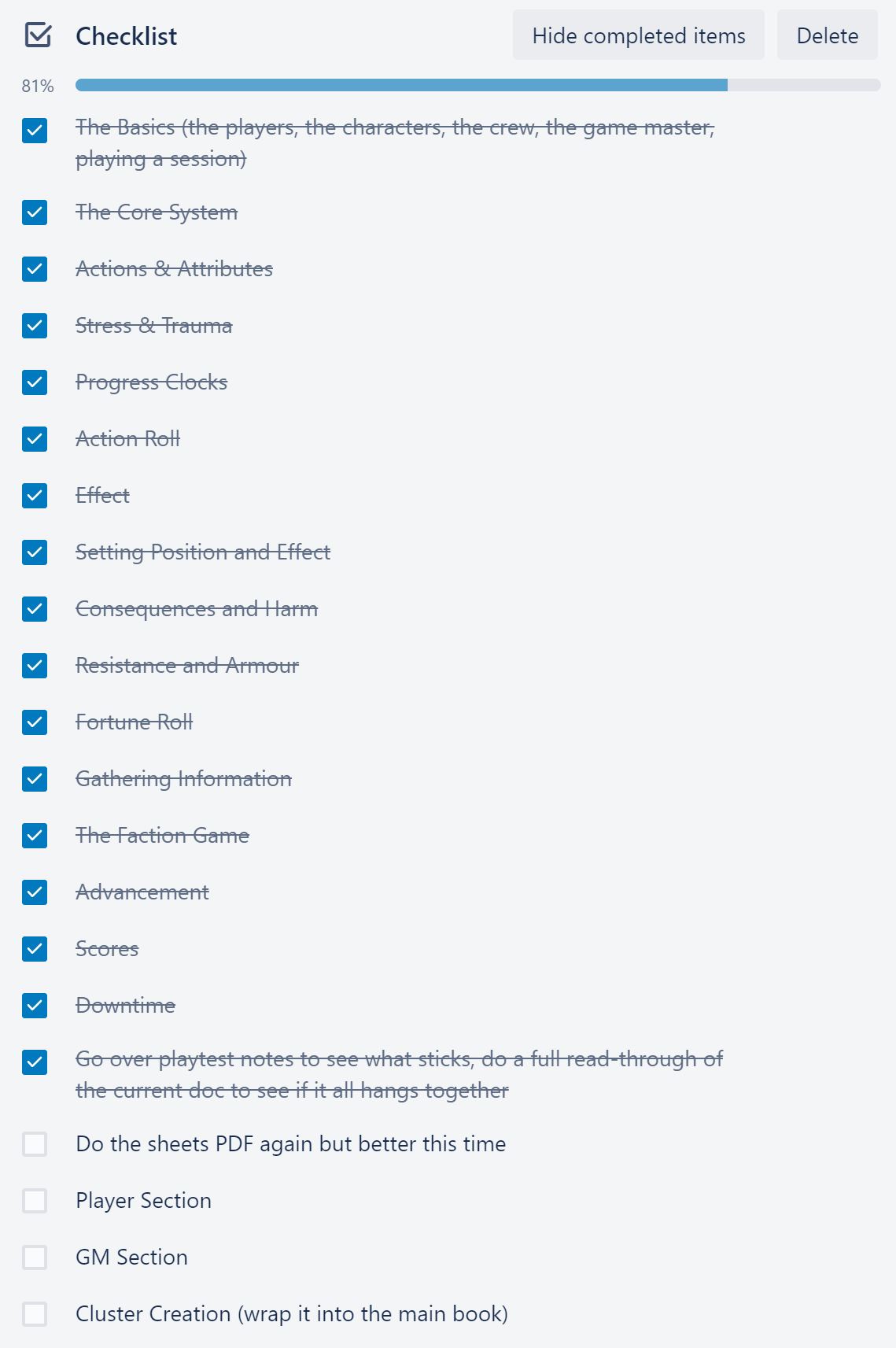 If you've ever taken a look at the Blades rulebook, or at the SRD, you'll recognise a lot of what's on this list - and I've got a lot of it done, which is great news! However, as you can see, I've still got the last push to do on some fairly complicated sections, namely the Cluster Creation section, which I'm moving into the main book and giving a big overhaul (I was just working on this tonight, in fact), plus the Player and GM guidance sections, which as you can imagine are quite involved to write. Imparting some measure of your own philosophy for running a game isn't the easiest thing to do in writing, especially if you're like me (or indeed most GMs) and are running on gut instinct and the internalisation of years of random advice from a hundred different sources. I'm also redoing the sheets pdf with some new layouts. I have no ETA on these right now, unfortunately, just given the nature of things, but it's all feeling tantalizingly close!

What follows are some previews of what I've been getting up to (including some fresh new art!), then a quick changelog to get you up to speed with what's being altered from v1.0 to v1.1... 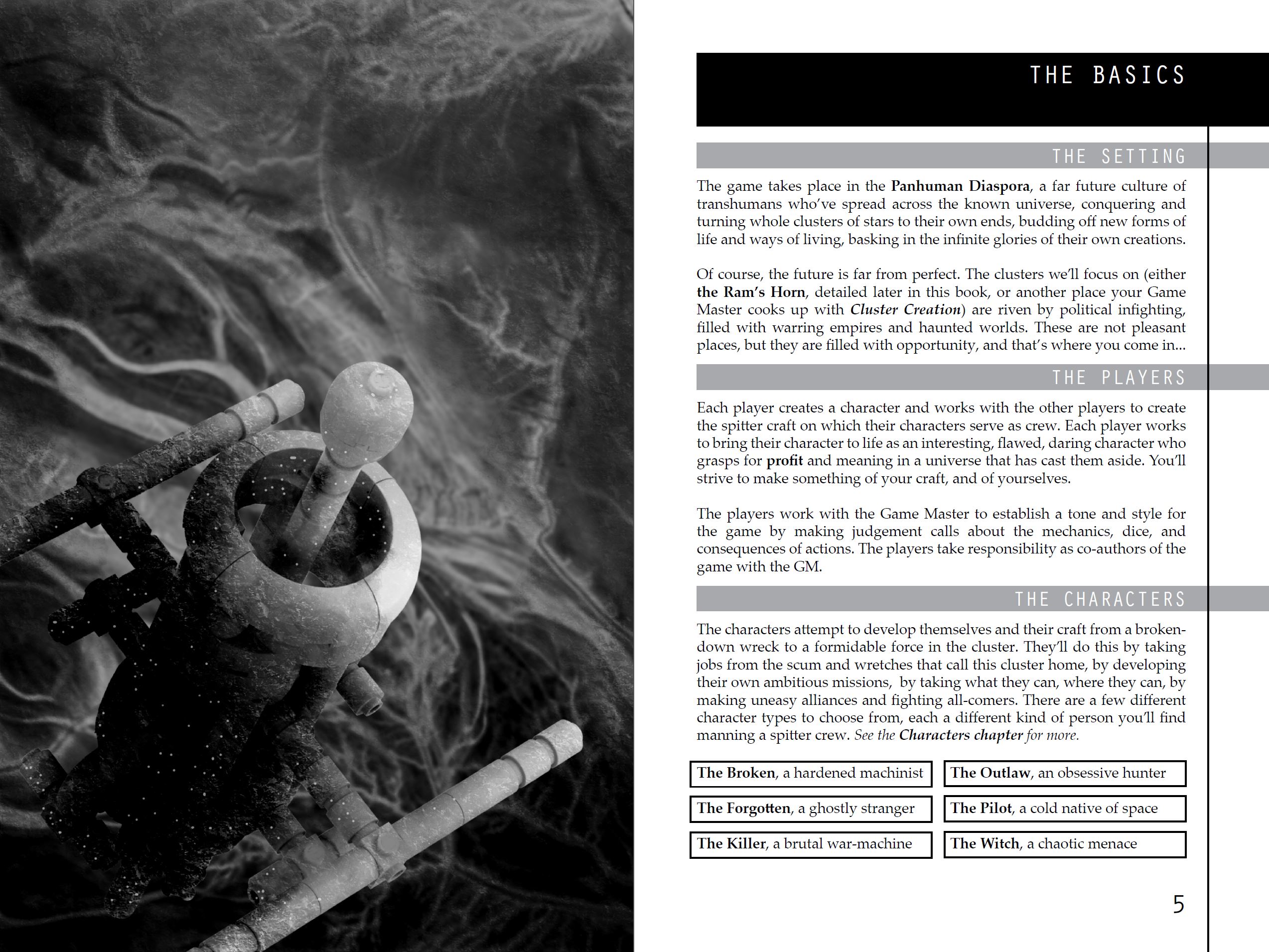 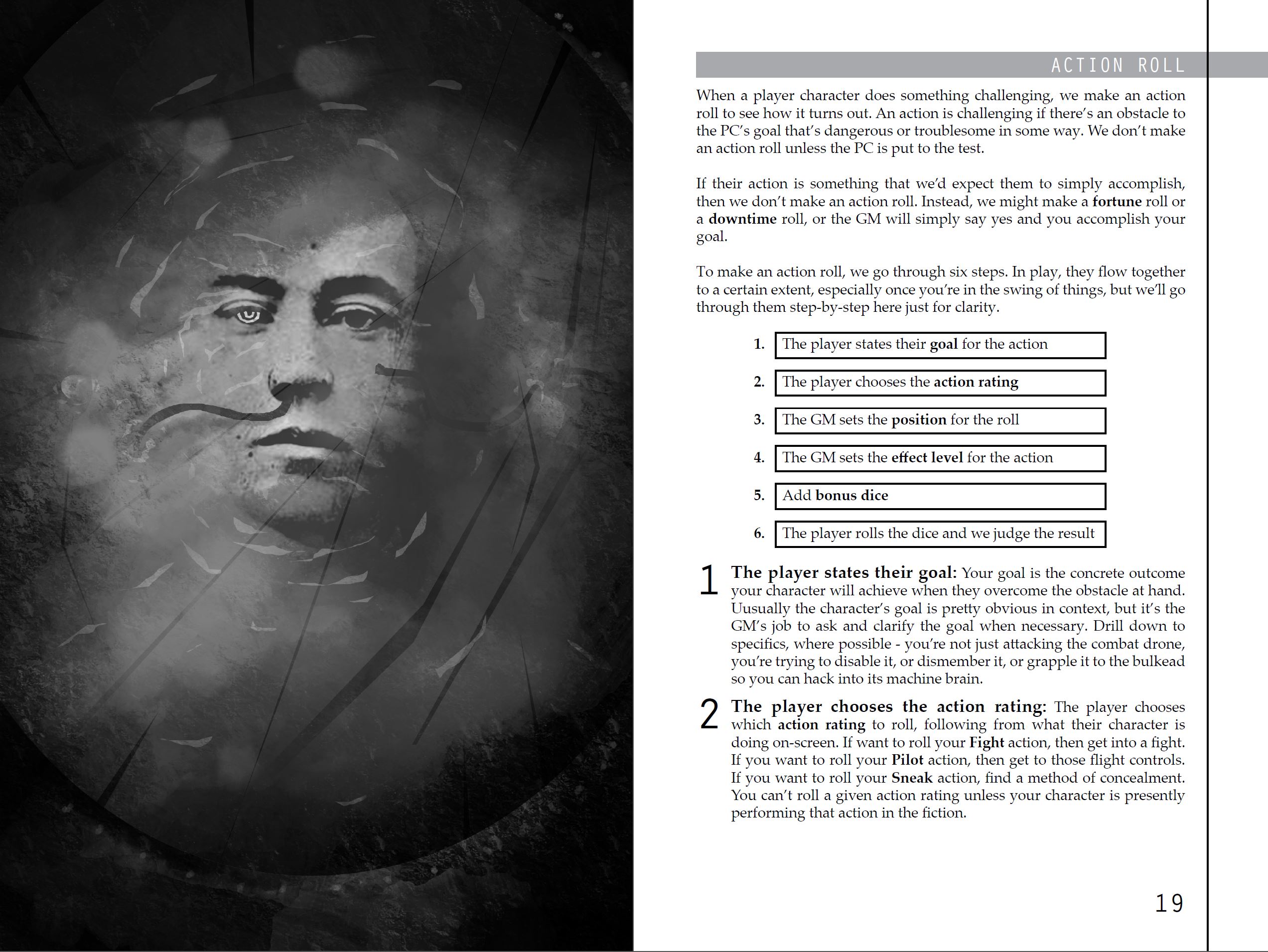 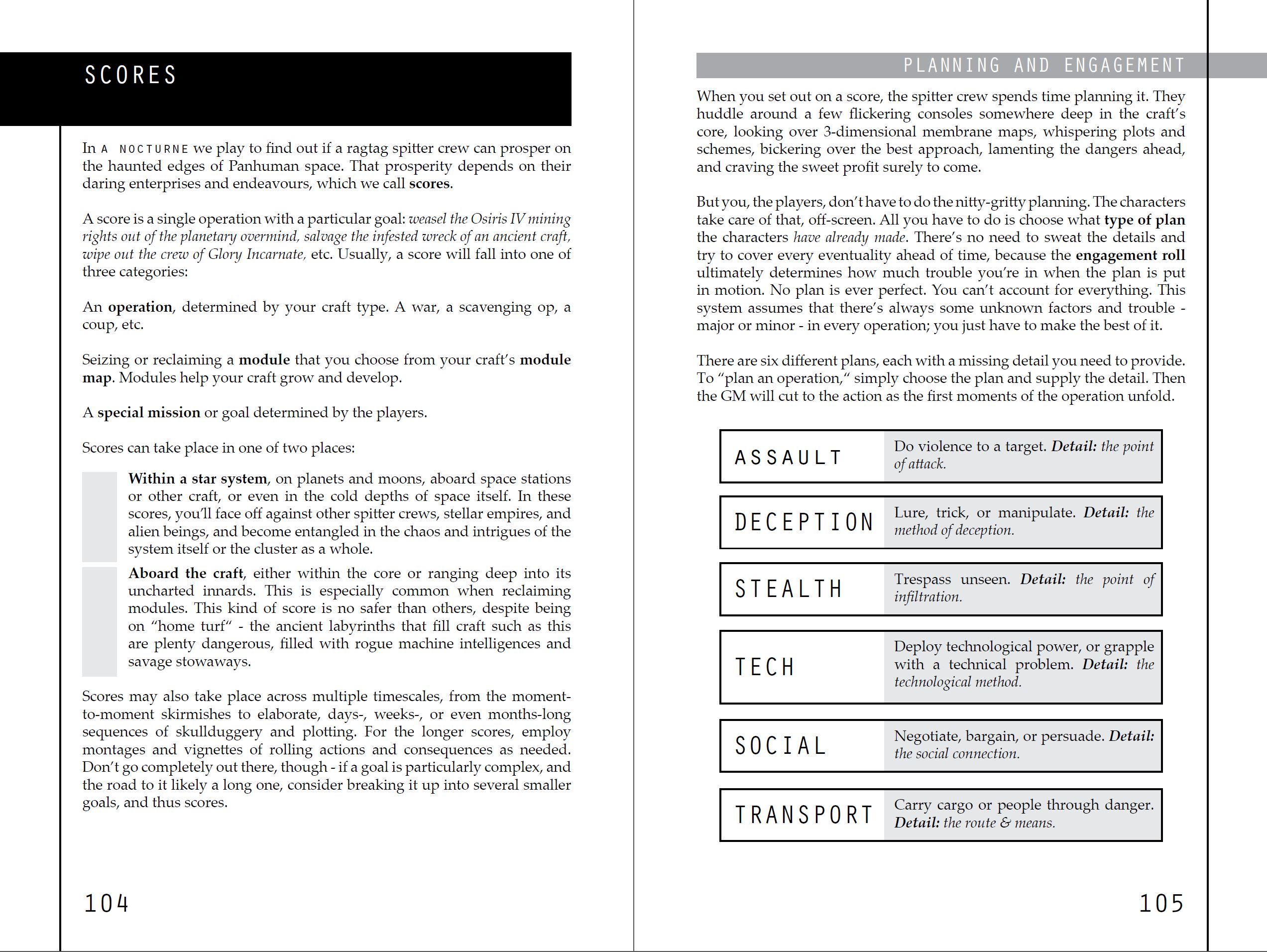 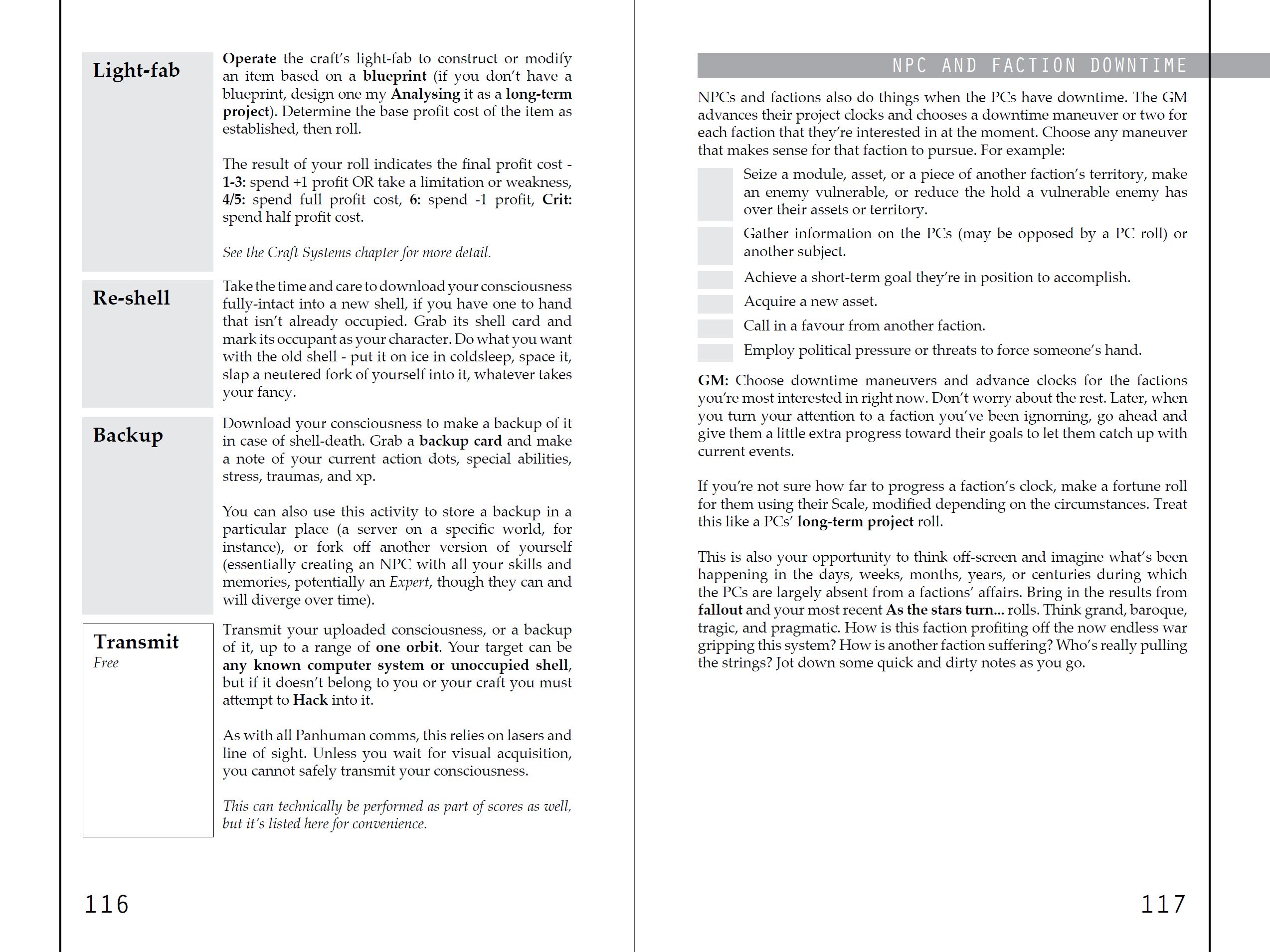 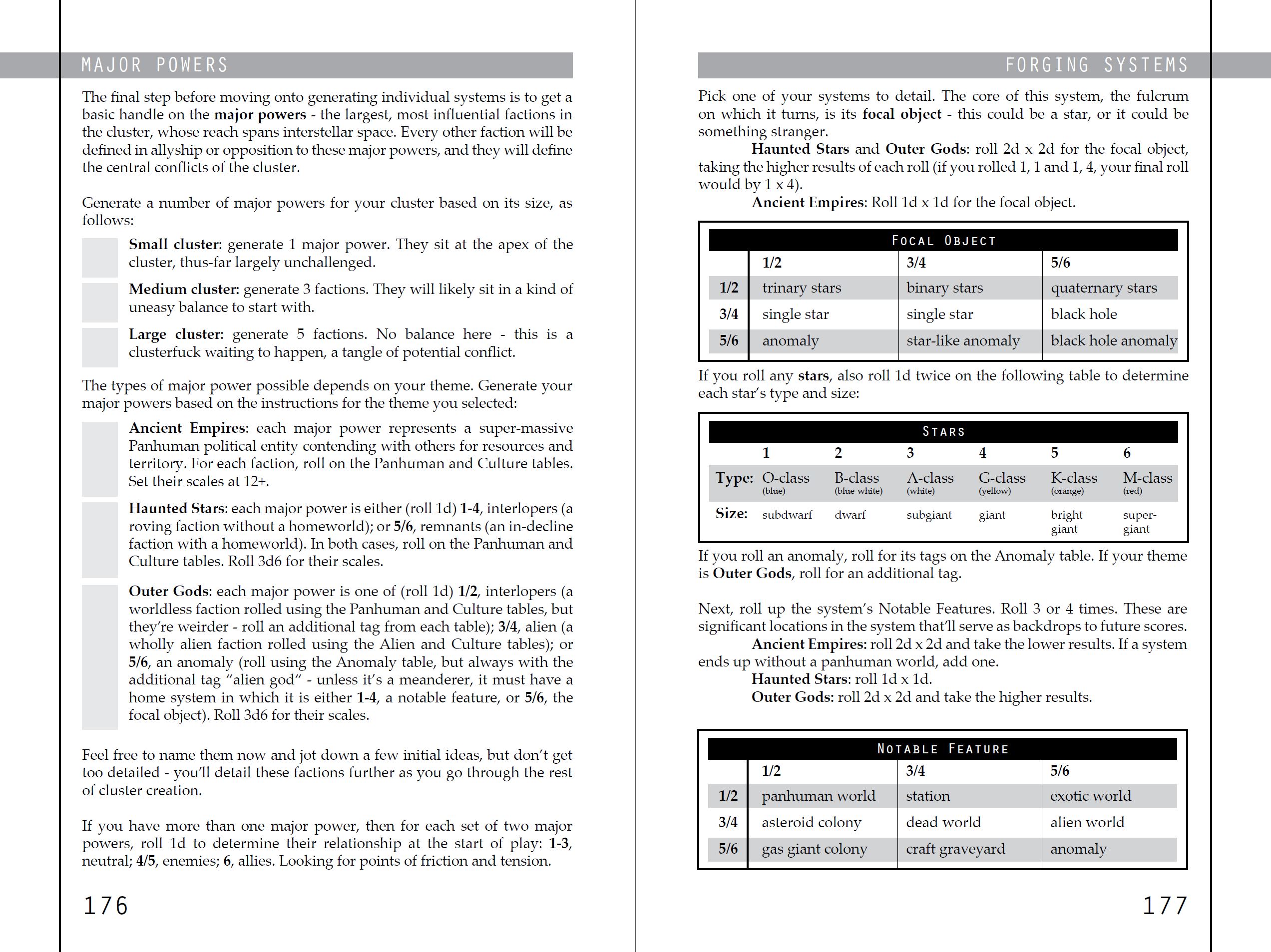 CHANGELOG i.e. different things to expect going into v1.1 once it's out:

I'm hopefully going to be getting in another in-house playtest game very soon, so there may be more changes coming, but the above covers the big stuff. Some of the changes I'm working on have also been inspired directly by feedback from people running  A NOCTURNE for their own groups (outside my influence, without my supervision!), and I can't thank them enough for providing it - just knowing that there are other people playing the game, let alone thinking deeply and critically about their play experience with it, is absolutely wild to me and never stops making me grin from ear to ear. Keep it up!

That's about it for this general progress update - v1.1, A NOCTURNE's official standalone version, is on its way! As stated, there's currently no ETA on this (I know myself and the current state of the world well enough not to put a fixed date on anything right now) but it should be within the next few months on my current trajectory. Due to the time and effort involved, v1.1 is going to be going for a higher price point than v1.0 - €20 to be exact - but everyone who already owns the game should be able to download it once it's out from their library here on itch. Anyway, you know the drill by this point - watch this space! 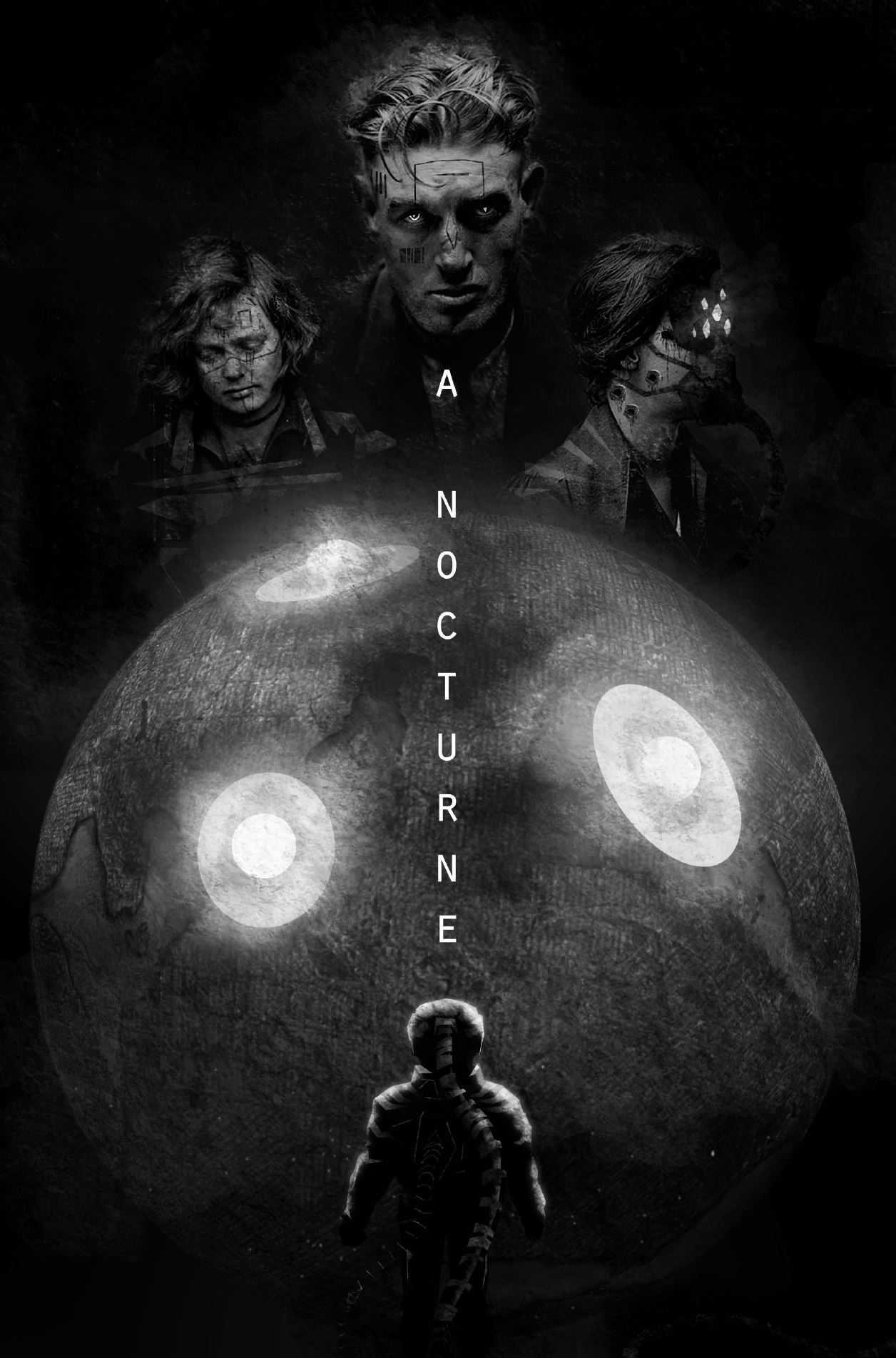 Great Update, sounds beautiful and so looking forward to the stand alone release, and very happy that you're focussing on the Player and GM sections. Love the Game, and think that especially these section will be essential for new Players/GMs to get a better understanding of what its all about, tone, style and themes. Nocturne ist such a deep and wonderfully nuanced game (based in its literary touchstones) that its important to give newcomers enought context to grok the universe.

Weird that this was posted today, as last night, this game was one of the last things I thought about. I wondered how it was coming along as I faded off to sleep.  Anyway, I'm just delighted it's getting worked on.  Version 1.0 was a bit intimidating to me, so I'm especially pleased it's getting some rough edges smoothed down a bit.

Sad to see Do The Math going; I kind of loved the nastiness of it. But I get where you're coming from and trust you to replace it with something equally appalling.