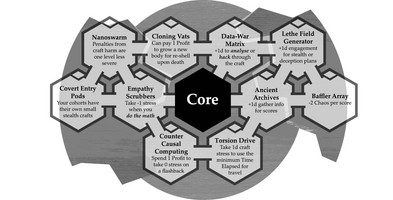 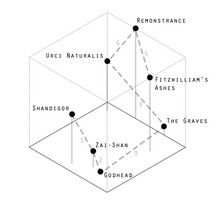 Yes, that's right, A NOCTURNE v0.9 is complete, and available to check out now! I'll get to the changelog in a second, but first you might have noticed that one or two things have changed around here. For instance, there's now.... art!? And now the game costs real actual money? "GASP," I hear you gasp. Well, I'll explain.

A NOCTURNE has been in the works as a serious concern for getting on two years now, and has been a mutant glimmer in my compound eye since at least 2015.  It's gone through a lot of development work, changed systems (!), and improved a whole lot. I've poured a lot of time and effort into the game you see before you, and will continue to chip away at it for the foreseeable future!

So, I thought it was high time I put a price on this thing. But don't worry, it's super cheap! You can buy it for as little as €5  -that's about the price of a nice pint of ale here in Ireland! Also, you can still get the sheets PDF for absolute, no-kidding free if you want to share the game around or just check out the sheets to see some of the new changes. The full paid version includes a full 80 page rules PDF, with explanations for all aspects of the game that differ from Blades in the Dark, and lots of lovely tables, as well as The Ram's Horn, a big, ready-to-play sandbox setting of haunted worlds, cults, and the threat of impending war, and what's more, you'll get all future updates to A NOCTURNE for free. It also comes with a nice, slimline version of the older Cluster Creation PDF if you want to generate your own sandbox for your crew!

Speaking of which, onto the changelog!

Oh, and laid-out the book all nice I guess, whatever.

Anyway, that's the new version of A NOCTURNE released! If you have any feedback (or, god forbid, spot any spelling errors), you can email me at thysane@gmail.com or leave comments on this page, and if you want to follow me on social media, my twitter is @thysane

Good luck out there in the Panhuman Diaspora!

This page really should more obviously re-direct to the v1.0 page.